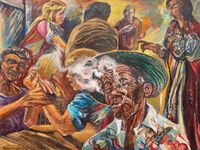 The art and traditional music communities lost a tall tree when Art Rosenbaum passed away this September. Artist, musician, and folklorist Art Rosenbaum (1938-2022) and wife Margo spent a lifetime criscrossing the backroads, collecting banjo and fiddle tunes, blues, gospel, and other traditional folk music of the United States. In the tradition of Alan Lomax or Harry Smith, Art recorded and Margo photographed, culminating in the Grammy Award winning box set, Art of Field Recording. Having taught visual art at the University of Georgia for three decades and authored several books on banjo and folkways, Rosenbaum influenced generations of young artists and musicians, while bringing fading traditions forward into today. Art’s paintings are often a blend of expressive realism and allegory, populated with traditional musicians and Athens, Ga hipsters, and are included in the collections of museums around the country, including the Smithsonian. Art and Margo Rosenbaum have spent their careers and marriage traveling across different media and modes through various states of space and time. Trained and active in painting, they have also for over 50 years documented the heritage of American roots music and folk culture through recordings, drawings and paintings, essays, and photographs. These varied media have been compiled in books and box sets, including Art of Field Recording Vol I and II: Traditional Music Documented by Art Rosenbaum. Volume 1 of the set won a Grammy Award for Best Historical Album in 2008. These varied practices intersect and complement each other as both artists capture the identity of a nation as expressed through its musical and folk traditions and express their own personal preoccupations in their paintings. The Rosenbaums’ practice is rooted in mid-century modernist figurative painting that, like American folk music, balances personal expression with universal experience. Margo Newmark Rosenbaum (b. 1939) was initially introduced to the Bay Area Figurative movement as a student at the San Francisco Art Institute where she studied with Richard Diebenkorn and Elmer Bischoff. In reaction to the dominance of Abstract Expressionism, these San Francisco Bay artists reintroduced recognizable subject matter into abstract painting through which they evoked a strong sense of place. Art Rosenbaum (b. 1938) also emerged from the post-Abstract Expressionist milieux, finding influences in the abstract, socially minded narratives of Philip Guston and John Heliker. Art majored in Art History and later earned an MFA in Painting at Columbia University in his native New York where he also dabbled in the city’s nascent folk music scene. While in college, he also began to capture field recordings of unknown and unsung blues and folk musicians. With these early roots in painting, performance, and cataloging, the paths of Art and Margo converged in New York, where they met and married in 1966 after Art returned from studying in Paris. In 1968, Art secured a teaching position at the University of Iowa where Margo acquired an interest in photography while earning an MA in Painting. The couple eventually settled in Athens, Georgia in 1976 where Art assumed a teaching position for the next thirty years at the Lamar Dodd School of Art at the University of Georgia, serving as the first Wheatley Professor in Fine Arts before his retirement in 2006.